Based on Fukasawa [WP] theme by Anders Norén. 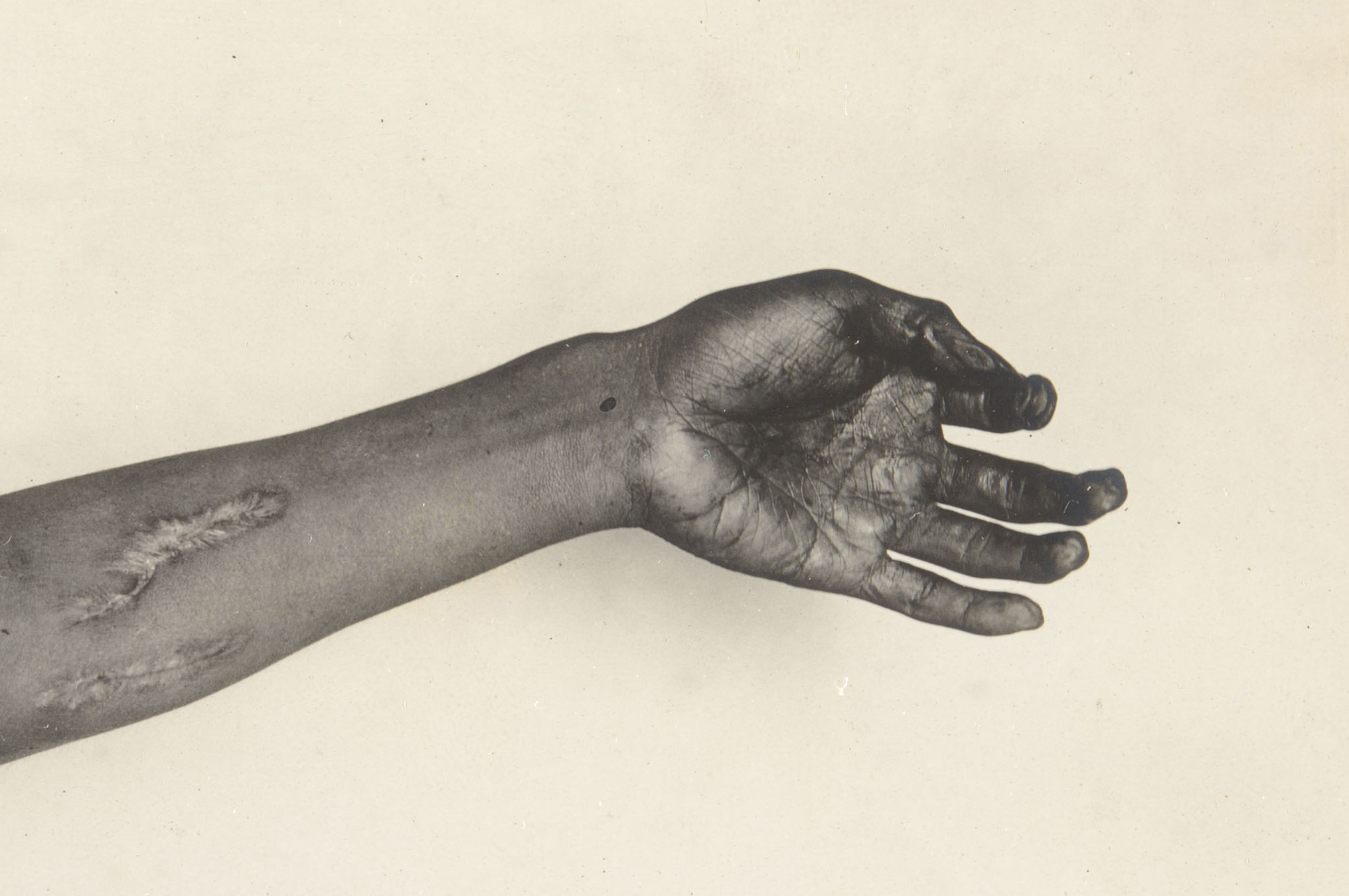 Response to a Referral by Kiri Dalena
10 December 2020

Comments on “Felizardo taken in 1906”

Only 4 pics, very limited info. Pictures were taken not really as forensic photodocumentation. Angle not directly perpendicular, no scale (ruler next to the image as reference), no orienting and close-up shots.

Images are photoshopped with details cropped apparently. Interesting to see originals with background, other items like the head block (used to prop up the head Pic 2) and clothes (was he wearing shorts or something was covering the genitals?).

Subject appears to be a young adult male, could be Filipino as claimed. Facial features, black hair, moustache, hair on legs. Slightly muscular build. Age probably at least 20, 20s-30s? Hair style might indicate something too; was that common among the ladrones? The scars are nonspecific but do help identify.

Interesting front midline sutured incision that must be the “postmortem” referred to in Pic 1 caption. Not the Y-incision of trained pathologists, just a straight look-see cut still common in “medico-legal” examinations today. Just the same it appears that as early as back then “postmortem examinations” were already being done. American system or Spanish influence?

There are other sutured lesions on the body. Linear and vertical on the right upper abdomen, stellate and irregular on the left upper abdomen. The first one is the usual site for trocar insertion (usually small though) but what was embalming like in 1906? This body appears well preserved, no signs of decomposition was it photographed soon after death or embalmed? The sutured lesion on the left is difficult to ascertain because of the shape (injury that was repaired?), it appears postmortem too (not hemorrhagic like the midline incision?). Lip and chin injuries are also sutured but not those in the neck. Again I am not clear about embalming norms back then. Probably the face was reconstructed for viewing.

There are signs of violent assault identified as “bolo cuts” so this is clearly homicide. These are the lip, chin and neck injuries which are consistent with hacking wounds. The deep neck injuries in particular could explain cause of death. There appear to be blunt force trauma too, above the left eyebrow, chest and right leg. Maybe abrasions and contusions sustained such as from a fall terminally. But this is speculative of course.

Raquel B. Del Rosario Fortun, MD Professor and Chair
Department of Pathology
College of Medicine
University of the Philippines Manila

Why should I back down
when you continue to strangle
and oppress peasant farmers
and besiege the masses?

Why should I back down
When you continue to plunder
The country’s coffers,
To kill, jail,
And kidnap
Activists
Who oppose you?

Why should I back down
When you continue to lick the boots
Of greedy multinationals
Who pillage the riches of my beloved country?

I open with the poetry of Randall Echanis, written originally in Tagalog and recently translated in English by writers Kit Kwe and Kris Lacaba.

Echanis was a beloved Filipino peasant leader and peace advocate who had endured the last seven regimes.

He was arrested and detained under three administrations, beginning with Ferdinand Marcos in the 1970s, Corazon Cojuangco-Aquino in the 1980s, and Gloria Macapagal-Arroyo in the new millennium. His life ended in the small hours of August 10, 2020, when he became one of at least 160 other Filipino political activists who have been killed since Rodrigo Roa Duterte came to power in 2016.

Randall Echanis was 72 years old and living alone in Quezon City when unidentified men forced their way into his apartment. When the men left, Echanis and a neighbor who responded to the disturbance, were found bound and lifeless.

That the killings happened to one of the most respected activists in the city center, where one of the strictest COVID-19 lockdowns was imposed, made the murder even more foul. Subsequently, the police attempted to steal his remains from his family.

An independent autopsy by forensic pathologist Raquel Fortun later overruled the earlier police reports that Randall was killed by a gunshot wound to the head. Fortun said his body showed multiple superficial stab wounds. This indicates that “he was made to suffer before he was killed” by a fatal stab to the aorta.

Postmortem photos of Randall’s grim visage were subsequently released to the public by activist organizations. The release of the photographs served to condemn cowardice and the unspeakable violence that was committed against one of the of the most devoted figures of the peasant movement. It also served to illustrate a raging disbelief:

How could someone like Randall⁠ — who was always so warm and animated, always there to raise a clenched fist⁠ — now be so still⁠, so cold and unmoving?

Why bring up the painful murder of Randall Echanis, recount his words and photographs as I begin this project about the Worcester photographic collection?

It is because we live in a time of continuous state violence and political attacks in the Philippines. These injustices should disturb and connect our every waking and dreaming as Artists and Filipinos. We should make it our unquestionable duty to push back.

When I was given access to the Rautenstrauch-Joest Museum American colonial images related to the Philippines, I had not yet read about about Dean Worcester, the First and Second Philippine Commission, Pitapit, the origins of Session Road, Julian Montalan, El Renacimiento, or Aves de Rapina.

It was just days after the killing of Randall Echanis, in August 2020, when I met with the director and curators of the photographic collection. I remember being asked about my impressions of the images. I also remember that I responded that it was still largely a blur.

But what was instantly indelible in my mind were a series of photographs of one man, taken from various views and sides which were accompanied by the caption, “Felizardo, ladrone leader from Bacoor, Cavite, after post mortem.”

These are the earliest postmortem photographs of a Filipino that I have ever seen. His name and his face was not at all familiar. I have not read about him in our history books but I was certain that captions were wrong: he cannot simply be a thief and might be someone who was slain because he was heroic.

This website uses third-party service to analyze non-identifiable traffic data. This service uses cookies. If you continue without changing your cookie settings, we will assume that you accept cookies. You may change your cookie settings at any time through your browser preferences.

This website uses cookies so that we can provide you with the best user experience possible. Cookie information is stored in your browser and performs functions such as recognising you when you return to our website and helping our team to understand which sections of the website you find most interesting and useful.

Strictly Necessary Cookie should be enabled at all times so that we can save your preferences for cookie settings.

If you disable this cookie, we will not be able to save your preferences. This means that every time you visit this website you will need to enable or disable cookies again.